The Segovia City Council has presented the exhibition "Insurrecta" by Gonzalo Borondo with which the 500th anniversary of the Commune Revolt in the city is commemorated. The Department of Culture celebrates this atypical festival of San Pedro in a very special way, presenting the tour of the 32 billboards that make up the project, located in 17 freely accessible locations and that turn the urban landscape into an open-air museum.

In this project, developed in collaboration with Acción Cultural Española, Borondo invites the visitor to discover on foot, by car or by bike, the 5 chapters of "Insurrecta", trying to generate reflections and investigate the cyclical substrate of history, taking as axis the commune revolt. The works are presented in a metaphor code and suggestively spin historical facts with a personal and critical reading towards our contemporaneity. At the same time, the artist discovers to the visitor a less known visual space of Segovia, promoting the visibility of the so-called No places .

If “Insurrecta” intends to interact with the landscape through these 32 intervened municipal fences, the work has also managed to generate expectation in Segovian society. During this time, many residents of the city have approached the artist and his team to convey their interest in the installation.

"Insurrecta" seeks an exercise in critical thinking and reflection through the harmony between visual metaphors and historical narrative. In addition, the choice of support is not accidental, Borondo connects the reappropriation of land by community members with the reappropriation of art on public billboards.

The whole project contains different techniques; However, all the works present the monotype as a common matrix, a technique that uses the tools of engraving but generating a single copy, with which Borondo wants to honor the informative intention of the series of engravings "Los caprichos" and "Los disasters" by Goya.

To make each work an experience in itself, the artist applies various plastic techniques that condense or expand the content of the works beyond the support itself: iron sculptures and micro-perforated panels overflow some of the frames; cyanotype in search of a dreamlike realism typical of the first photographs; the use of animation in others expands the project beyond the original support and, of course, the juxtaposition of the fence itself with its surroundings, plays with the perspectives and landscapes of the area, becoming part of the work.

The nature of the project, beyond commemorating the communal revolts, involves transferring art to easily accessible public spaces, democratizing the enjoyment of the work and positioning forgotten areas, Non-places, on the tourist map of the city.

Visitors have a map of the 17 locations, available to the public at the Visitor Reception Center and other municipal agencies such as the Segovia City Council, the Department of Culture or the municipal museums, which includes an account of the revolt for each of the interventions. In addition, each stop is marked to indicate the perspective devised for contemplation, although it is invited to take it with the greatest freedom. The project can be visited until April 23, 2021.

Gonzalo Borondo (Valladolid, 1989) resides in Segovia after more than 10 years developing his artistic career outside of Spain. In October 2019, he was commissioned by the Department of Culture to create an artistic project to commemorate the 500th anniversary of the community uprising in Segovia. In this way, INSURRECTA was born. After a first phase of research, through texts of a historical nature, the artist pays tribute to the Comuneros, deepening the idea of ​​Revuelta and extending the analysis of the power struggles beyond the established framework, applying it to other fronts, such as : humanity faced with nature, the discourse of the urban in the natural landscape, the effects of imposition on society, the reappropriation of spaces by different agents or changes in the status quo. The communal uprising meant a before and after both in political life and in social life in Spain, especially for Castile, having Segovia as one of the main scenes of said revolt.

The culmination of this project has meant a month of work in which an international team of more than 15 people has participated, made up of editors, production, designers, photographers, video or communication, among others. Along with Borondo, part of them have carried out their work in La Cárcel_Segovia Centro de Promoción, where the artist has piloted this project.

Gonzalo Borondo's work connects figurative painting and installations with their own physical and psychological contexts, and is guided by his desire to understand the human being in its most symbolic complexities. His works break the limit of what is imposed by the inertia of a place, while respecting it and paying tribute to its legacy. Likewise, his personal language is formed by human contradictions, by the symbiosis of opposite images.

His most recent projects include: the intervention in the Temple of Chartrons, in Bordeaux, within the framework of the Liberté! 2019; at the Contemporary Museum of Rome (2018-2019); at the Festival de Musiques Interdites in Marseille; in Berlin (Urban Nation Contemporary Art Museum); and at the Altrove Festival (Italy). She has starred in solo exhibitions in Madrid, Paris and London, and has murals in Kiev, Lisbon, Milan, Barcelona, Honolulu, New Delhi, Copenhagen, Atlanta, Rome, Istanbul, Madrid or Las Vegas, among many others. 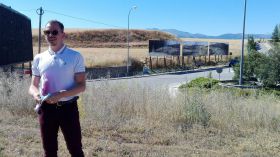