What to see in Coca 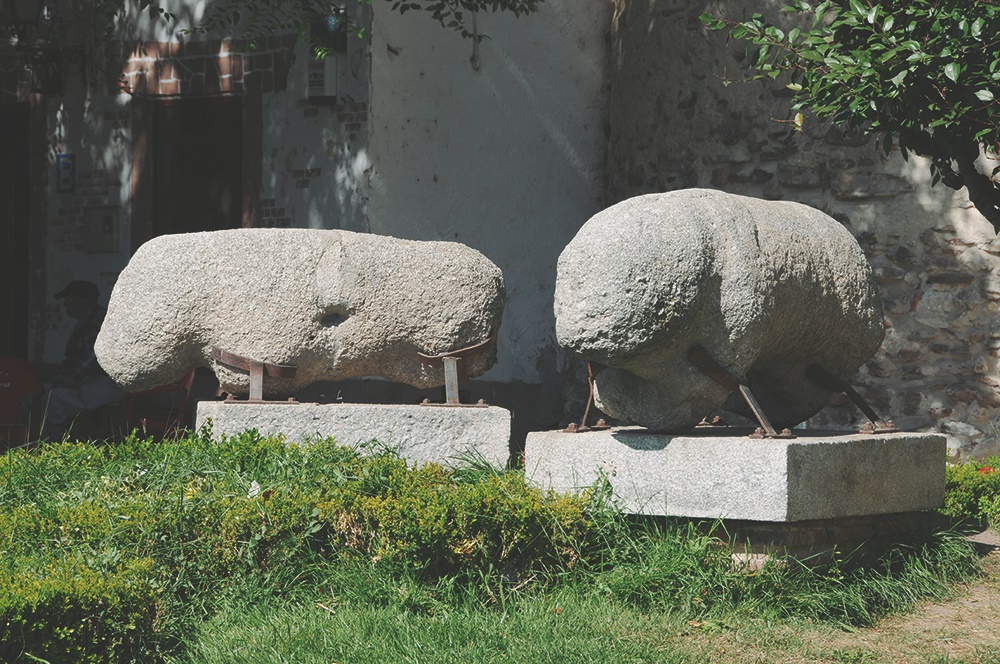 Apart from the majestic Castle, we can see other tourist attractions such as churches, Torre de San Nicolás ...

Border area in the centuries before the Roman domination, the influences of Celtiberians and Vettones, the bordering towns, are a hallmark of archeology Cacau. The boars, zoomorphic sculptures made in granite and characteristics mainly of the village vettón (located in areas of the provinces of Ávila and Salamanca), would be used as landmarks of the territory and reflect the importance of livestock movements in this area since ancient times.

Three are those that are conserved in the Villa; one inside the enclosure of the castle, next to the south face of the wall that penetrates by him, and two in the surroundings of the door of the Villa. Singular each one of them by its style of execution, one of them conserves, very deteriorated, a funerary inscription, of Roman time, giving account of which would be its last use, the one of funeral monument.

Dominating the Plaza Mayor, rises a large brick construction in a wall with limestone buttresses, with great simplicity of lines on the outside, broken only by the preserved remains of the primitive Romanesque church: the lower part of the tower, of the same style than that of San Nicolás, and the walls of what was the bishop of Cádiz's chapel, built in the s. XV. Its interior is shown with one of the most outstanding temples from the beginning of the s. XVI in the province, following a scheme used, for example, in the church of the El Parral monastery, in Segovia. With a single nave, the temple is covered by a ribbed vault, possibly the work of Juan Gil de Hontañón, as he was in the town during the works.

The choir, located at his feet, is opposed to the main altar, impressive work, with columns of giant order. Conceived as a funerary chapel of the Fonseca family, it holds four sepulchres of pure Italian style and made in fine Carrara marble, created in that country by Domenico Fancelli and his Spanish disciple Bartolomé Ordóñez, connecting in his execution with that of the Catholic Monarchs, located in the Royal Chapel of Granada. In addition, the carvings of the Santo Cristo de San Nicolás, Romanesque from the 17th century, are worth noting. XIII and from the church of the missing church of San Nicolás; that of Santa Ana, from the beginning of the s. XVI; the Calvary, of the same period and that follows the parameters of Berruguete; the tomb of Antonio de Fonseca.

Only visible remnant of the missing Romanesque church of San Nicolás. Its constructive system, together with that of the tower of Santa María la Mayor, forms a differentiated style in Romanesque Segovia: rows of blind arcades in the first body, open in the second, brick thorn or masonry in each of its four sides, terracing in the upper part achieved by a vault of great quality and an outstanding function in the margin of the sacred: its position, close to the valley of the Eresma, turned it into a powerful defensive watchtower from which access was controlled by the north to the Villa.

In the area known as the rabbit hut, outside the town, was built in the year 1728, under the patronage of D. Gaspar de Sarabia, this rural hermitage, of modest dimensions, but a profuse decoration molded in its barrel vault. Presiding over its façade, the family coat of arms, in white limestone.

He counted the Villa with three hospitals in the middle years of the Middle Ages. Of them, only that of Mercy has reached our days. Although the first news preserved from him refer to 1442, this hospital had to start its activity long before.

It was built, following hygienic criteria of the time, starting from a central distribution body, with a chapel, and two wings on both sides. The original building was demolished in the last years of the s. XIX, being replaced by the current one, made in brick and adobe chains, following the previous floor.

Next to the Cinco Caños building, to the north of the Eresma riverbed, the remains of what once was, possibly the residence of a municipal magistrate of the ancient Roman city of Cauca, are preserved. The 200 preserved near m, offer colorful frescoes, with different compositions, reaching two meters in height.

Access to the Villa must always be made by crossing a river channel. The so-called Grande Bridge, which avoids the Eresma River, was built on an earlier one, of Roman origin. Built in the s. XVIII by the Community of Coca, rises more than a dozen meters above the river, which opens into a single and large eye, half cannon. The Chico bridge has its roots in the Middle Ages, although in its façade the trail of different reconstructions can be followed, which give it its current appearance. Initially with only one eye, pointed, it was necessary to build a second one, in order to prevent the destruction caused by the Voltoya River in the flood season. The bridge over the Balisa stream, of dimensions significantly inferior to the previous two, was formed in the s. XIX following the tradition brick factory, at its base retains voussoirs of what must have been a primitive medieval bridge.

Surprising to the traveler who approaches the Villa, the unique system of placement of the tiles on the houses of Caucenses: rows of tiles interlaced in the longitudinal direction and concave position.

The distribution of spaces in the typical house, consists of a ground floor, in which life develops, a loft, the typical "sobrao", visible to the outside by the small windows, "skylights", and in many of the cases, a cellar in the subsoil, to produce the famous, in medieval and modern times, Coca wine. It is preserved from the s. XVII the emblazoned house of the Sarabia family, in Valdenebro street. His shield, consisting of a single barracks and five fleurs de lis, shelters the door. Next to the house, built entirely in brick, the farm gate completes the facade.

In its auction, the eaves, formed by bricks built in a quarter circle, typical of the time. In the final years of the s. In the 18th century, a peculiar system of auction was introduced in the eaves, still visible in the solar carousel, especially in the street, of the Royal Glass Factory: slate slabs. The building par excellence that conserves this system, in the mentioned street, is the one of the old Real Factory of Glass, in the confluence between the mentioned street and the Mesonero Mayor street of Castile.

Architecture of the s. XX

Still the thirties of the s. XX accommodated the architectural fantasy. The House of Villa y Tierra dates from that decade, designed by the architect D. Andrés Cevallos and is faithful to the traditional systems of the Villa: brick, arches, slate ... an endless number of solutions distributed around the magnificent stained glass windows that illuminate the assembly hall, whose roof is an authentic monument to wood, the basis of the local economy.

Also the current Fonseca cultural center, was assigned in its first moments to children's school. Distributed according to the criteria of the rationalist architecture of the republican era, two wings are composed in plane, to which add an open pavilion, all united by a polygonal central body.