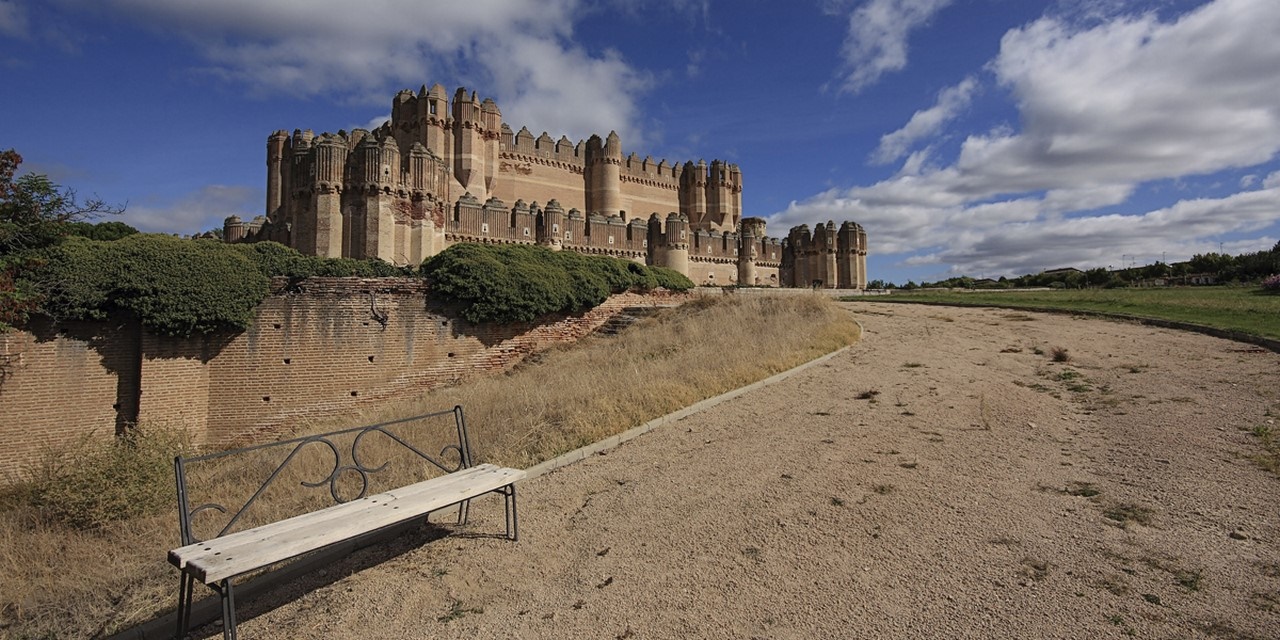 The Castle of Coca is one of the most spectacular castles in the province of Segovia.

A masterpiece of Mudejar and Gothic military architecture, the Coca Castle presents the traveler as an impressive brick mass, protected by a powerful moat that exceeds twenty meters in depth. Started works in the final years of s. XV, once installed the influential, within the Castilian court, family Fonseca, will culminate in the first years of s. XVI. The castle is really a dream come true, as well as a demonstration of power. Nothing in it was left to chance, being profusely decorated both on the outside and inside.

The sequences of paintings with geometric motifs cover the entire perimeter, making each of their views different. In the same way, different are each and every one of the merlons that crown its construction. As culmen to this, the well of listening, architectural spur that is observed from the gardens located to the south of the castle, in the base of the same one and that allowed to control the only non-watchful point of the strength, preventing an attack by the system of gallery of mines. It has a slightly irregular floor, due to the fact that the walls of the defensive wall of the Villa were used on its south and west sides.

Inside that floor, the courtyard, once covered with colorful tiles and surrounded by marble columns that followed the Corinthian and composite orders, according to the story of Pascual Madoz in the central years of the s. XIX, and that were sold by the secretary of the Duke of Berwick. In his interior visit, the traveler can not stop admiring each and every one of the vaults, masterpieces of his designer, Ali Caro; varied repertoire of solutions, of which even the humblest of the castle's guardrooms was equipped. And in its walls, following the decorative line of the parade ground, the geometric ones, made in red, blue, white ..., imitate the decoration of tiles with which the family would surprise the most illustrious of the visitors.

Quoted by the historian Appiano, the wall that protected the Vaca city from Cauca appeared timidly in 2011 and 2013, but only in 2014 has it been scientifically documented. It is adobe and adobe based on slabs of shale, shale and quartzite, it is preserved up to 2,23 m height (had between 7 and 9 m), its thickness is estimated at about 6 m and its construction date, once analyzed ceramic remains embedded in it, is placed towards the end of s. IV or beginning of III BC

The Villa was surrounded by walls, as was Cauca Vaccea prior to the arrival of the Romans.

Knocked down by various historical ups and downs, more than two hundred meters in original position are preserved, among which stands out the door of the Villa or door of Segovia, one of the entrances with which in ancient times it counted the enclosure. This door, is framed in brick alfiz in its external face, possibly realized centuries after the construction of the murario facing. On the alfiz, a gallery run of windows finished off in means arc point, destined to the defense.

On its intramural side, the pictorial representation, made on a table and located on the lintel of the door, of the theme of the "Deesis", shows the religiousness of the Villa in its medieval years. Two rectangular windows open at the top, which served to give light to the rooms of what was the jail of the Council.