The museums managed by the Junta de Castilla y León, the provincial and the Zuloaga, will be free until July 31.

The world of culture, with so much weight in Segovia, is gradually completing its own de-escalation plan. Yesterday, May 29, the Segovia Museum and the Palacio Quintanar design center opened. They did so with strict hygienic-sanitary measures, in accordance with the protocols that the Ministry of Health has established for this type of facility. The Ministry of Culture and Tourism of the Junta de Castilla y León has also decided that the museums it manages are free until July 31. This measure of grace affects the Segovia Museum (open from yesterday, from Tuesday to Sunday, only in the morning, from 10:00 a.m. to 14:00 p.m.) and the Zuloaga Museum, located in the old church of San Juan de los Gentlemen, which will reopen next Wednesday, June 3 (this museum is only open on Wednesdays), also from ten in the morning to two in the afternoon.

It has not been an easy week for the managers of the Segovia Museum, who have had to work on developing a strict reopening plan to adopt the most demanding security requirements. "The objective was to guarantee the safety of visitors and of the museum's own employees," says its director, Santiago Martínez Caballero. At the moment, the museum, installed in the Casa del Sol, the old slaughterhouse, can only accommodate one third of its capacity, which is equivalent to about forty-five people spread across the eight rooms that the facility has. “We have provided a signage on the floors and walls indicating the itineraries that visitors must follow to avoid the accumulation of people in a certain place. These indicators also guarantee the safety distance between people, "explains Martínez Caballero. Lockers, lockers, buttons or buttons for videos or models have also been disabled, and only one person can get on or off in the elevator. "It's about minimizing risks."

Of course, visitors and workers are required to wear a mask at all times and there is hydroalcoholic gel at the reception desk to disinfect their hands before entering the rooms. Museum staff will also monitor compliance with the regulations and clarify any queries that may exist. The same measures will apply to visits to the Zuloaga Museum.

Yesterday was the first morning, and adaptation to the 'new' normality became rare. The activity will return little by little, although, in fact, Segovia has remained active since the beginning of the pandemic through social networks and the Internet, with a virtual space that has allowed visitors to access numerous resources, from virtual visits and the contemplation of the most significant pieces, up to the participation in community initiatives, or the possibility of consulting informative texts and audiovisuals that expose in a didactic way the work of investigation and study that the museum carries out. Free admission for the next two months also seeks to "re-engage" the public and encourage visits.

Design
The Palacio Quintanar center also returned to activity yesterday after two and a half months closed to the public. At the moment, only the rooms on the ground floor, where the exhibition 'This is not a poster', by the designer Isidro Ferrer, can be visited. “We opened it on January 31st. As it was only open for a month and a half, until March 13, the last day before closing, the artist has agreed to extend the exhibition period, so he will remain in the center until the last day of September, "explains Gianni Ferraro, director Palacio Quintanar, center managed by the Fundación Siglo of the Ministry of Culture and Tourism of the Junta de Castilla y León.

This installation has also adopted the measures required by postcovid reality. The visitor has masks, gloves and hydrogel at the reception desk. Printed vinyl on the floor and walls indicate the route to follow, in order to avoid that each room accommodates more people than allowed. “This ground floor only has the capacity to accommodate a maximum of twenty or twenty-two people. In some rooms there is the possibility of accessing up to five at a time, but not more. It is very important that we guarantee the safety distance. Quintanar Palace can be visited quietly as long as the rules that the health authorities have established are respected, "recalls Ferraro.

There is still time for the center to resume its program of cultural and educational activities. «There are no activities planned throughout the summer, nor guided tours. For the more immediate future we are considering different scenarios, but it is soon to enter them. We don't know what will happen after the summer. Depending on the situation, the evolution of events, we will act in one way or another, "reveals the director of the center. Palacio Quintanar will probably host a "reduced" activity in September corresponding to the Hay Festival or some puppet show in Titirimundi, but it is not yet known for sure. In any case, it is not for me to say. I hope it can be done, because it will be a good sign, "adds Ferraro, happy with the return:" We really wanted to return. " 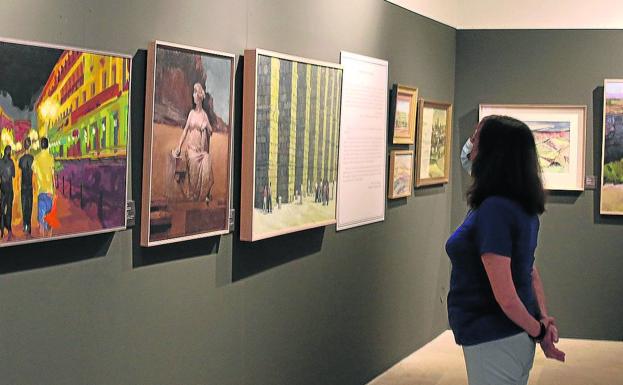