The president of the Rural and Active Tourism Association of Segovia, Domingo Asenjo, affirmed that the forecasts point to "it will be a better summer than others" for the sector, which saw all the reservations and events being canceled due to the declaration of the state of alarm and everything was "zero". The province of Segovia is preparing to take advantage of a summer in which "interior, proximity vacations" will be sought. Asenjo calculated that, for July and August, the reserves are between 35 and 40 percent.

"They are reserved and confirmed in many of the cases," said Domingo Asenjo, the most popular being rural houses with full accommodation and large gardens, with a lot of space thinking of spending a lot of time on the premises, in addition to making reservations. for longer periods of time, than in previous summer periods.

In addition, there is a high demand for swimming pools, which surprises owners of rural tourism accommodation in the province of Segovia. "They ask you about the pool when, in this sector in Castilla y León, there will be about ten percent of accommodation that can be rented with a pool," said Domingo Asenjo.

For the president of this group, the latest push for reserves is yet to come, which will depend on how the last days of this month pass, in terms of the evolution of the coronavirus once full mobility between territories begins. In his opinion, if things remain calm and controlled, without reoccurrences, many families and groups will be encouraged to find where to spend a few days of vacation. What they have noticed is that from the Community of Madrid, "at the moment it is going slowly."

What happens with the end of the alarm state and the first weeks of the so-called 'new normality' will mark the development of the activity of rural and active tourism because still, Asenjo warned, "mistrust and fear of regrowth can take its toll" , although the sector is convinced that it will be a better summer than others.

A good thermometer that the situation is improving is that many of the partners already have all the dates closed for the months of July and August and, given the demand and requests received from potential customers, they put this information at the service of their colleagues through your WhatsApp group. "We have been offering alternatives for about ten days because there are many people who already have it rented for those dates," he stressed.

An attractive and safe province

Building trust and security is “everyone's business”, in the opinion of Domingo Asenjo, who has been demanding in meetings with the Provincial Council and the Board, to do everything possible to give that security to the owners and clients of their businesses against the coronavirus, thus as in the territories and in the monuments and natural spaces that are open to the public. "Let it be known that care is taken, that there is a protocol, that access and gauging are controlled, for example in a very visited place such as the Hoces del Duratón Natural Park," he argued.

For the Rural and Active Tourism Association of Segovia, it is also essential that this summer, marked by longer stays by visitors, they be offered adequate health care that helps generate that image of a safe province against COVID-19, opening all local medical consultants.

Asenjo explained that for a weekend, no one thinks that he will need to use the doctor but if you are a long season, there are clients who ask how to process the papers to go to the center. For this sector, private initiative and public administrations have an opportunity, this summer, to create "loyalty" among people who have come little or never, giving a good image of the territory and its services.

The sector began to see the light at the end of the hard tunnel of the crisis generated by the pandemic in May, when the different territories began to go through the phases of the de-escalation, a good number of people were registered who began to call and write interested in planning an indoor vacation in rural accommodation.

The previous months were very hard. “We had a cancellation of everything there was, how much or little there was for events or weddings for June, July and August everything was canceled. Everything was left to zero, signals had to be returned and everything was a process that for people who are professionals of this was a very hard stick, ”said Asenjo.

According to the data of the Junta de Castilla y León, corresponding to 2019, the province of Segovia, had 473 rural tourism accommodations, with 4.301 beds, with increases of 2,6 and 2,8 respectively in relation to the data of 2019. 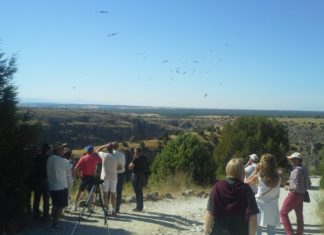