The Minister of Culture and Tourism, Javier Ortega Álvarez, visited Astorga today, where he held a meeting with its mayor, Juan José Alonso Perandones, to address issues such as the promotion of the Camino de Santiago through the Vía de la Plata, during the Jacobean 2021-2022. Accompanied by the general director of Tourism, Estrella Torrecilla, the counselor has had the opportunity to present to the Astorian councilor the project 'El Camino de la Plata', in which the Ministry of Culture and Tourism of the Junta de Castilla y León participates, along with Andalusia, Extremadura and Galicia. The objective of this project is to promote the transit of pilgrims along this Road, which crosses the four Communities, and to spread the wealth that exists throughout the route to help municipalities and businesses to show themselves as part of the route, encouraging this option for the Jacobean 2021 and 2022, the next two years. The counselor highlighted the importance of this project "which has been launched on the basis of adding, with four Communities and four political colors that exemplify the idea of ​​Spain and institutional collaboration for the Junta de Castilla y León, always betting on what unites us ”.

According to the data provided by the different tourist offices and the Santiago de Compostela Pilgrims Office, the total number of pilgrims who arrived in Santiago using the Mozarabic Way and the Via de la Plata has decreased considerably in recent years, going from a percentage from 5,22% of the total number of pilgrims in 2010, to 2,79% in 2018, which has meant that the Vía de la Plata goes from occupying a fourth place in terms of pilgrimage routes in Spain in 2010 to a seventh place in 2019. In Ortega's opinion, these data corroborate the need for joint collaboration between the four administrations, to reactivate this route as a pilgrimage route.

Among the different actions that have been put in place, the website www.elcaminodelaplata.com is included "to value the wealth of this Way and at the same time serve as a link between our territories". It is a dynamic website, in which we work continuously, enriching it, providing events and all kinds of information of interest to encourage pilgrims to make the Camino to Santiago de Compostela from Andalusia, Extremadura and Castilla y León.

The counselor has assured that since its launch, 'El Camino de la Plata' has been presented as an "open, inclusive and dynamic project, always ready to listen." In this sense, he explained that at the start of the project they worked on the information of the municipalities of the Mozárabe or Sanabrés Way, from the deviation of the Vía de la Plata in the province of Zamora, and at present they have already been incorporated the municipalities, both in the province of Zamora and León, through which the Vía de la Plata runs until it joins the Camino Frances de Santiago, as stated by the Astorgan mayor. Arrived at Granja de Moreruela, the walker will have to decide whether to follow the Mozarabic Way, which goes through Sanabria and Ourense, or to continue to Astorga to join the French Way. The website offers extensive information on both branches, which in the case of the latter are divided into the stages Granja de Moreruela-Benavente; Benavente-Alija del Infantado; Alija-La Bañeza and La Bañeza-Astorga.

In addition, the project includes the creation of a group of 'Sentinels', who contribute the human side and close to the Camino, representing the interests and curiosities of the pilgrims, as well as a real vision of what happens on the Vía de la Plata. Currently, there are 50 active sentries, who are protagonists of the live broadcasts, with which it is intended to help value the Camino de la Plata, its customs, its jewels and its people.

The website collects useful information on how to plan the Camino, curiosities and stories about the Camino, news and current news on cultural issues and the development of restrictions due to COVID, a calendar of live virtual events and a section for the 'Sentinels '. But it also provides direct access to the pilgrim's diary on his way through 'Las Joyas de la Plata', an initiative starring the Sentinel Sergio Flores, who delves into the adventures of the Camino de la Plata and invites users to share with him his journey live. It is a diary that is published biweekly, Thursdays and Sundays, in which the feelings and emotions that a pilgrim may feel when crossing Las Joyas del Camino de la Plata are detailed. This adventure is documented through photographs and videos that provide the web and social networks with original content. Due to the pandemic and inclement weather, this sentry's route had to stop at the Port of Béjar and will continue its journey once the situation normalizes.

During his visit to Astorga, the counselor has visited the Roman Museum, the Chocolate Museum and the Episcopal Palace with the mayor. 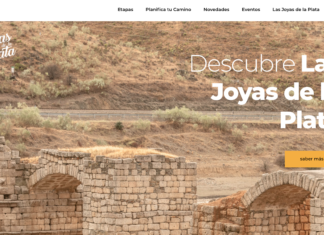